My friends and I made a short film and entered it in a con­test. The basis is that you have to accu­rately recre­ate a film in 60 sec­onds. Then you have to get lots of peo­ple to like it. If the judges like what you’ve done on both accounts, you win the con­test — $10,000.

I did makeup/hair and wardrobe on the film, which enti­tles me to a chunk of change from the pot. It was a load of fun, and though hair isn’t my exper­tise (I didn’t go to school for makeup though…12 years ago), I think we made a great film.

What would be even greater though, is if we won. You all know I need the help, and that amount would mean On Demon Wings might come out ear­lier (after all, I need to cash to pay my edi­tor — and he’s already doing me a huge favor).

That sounds like bribery though, doesn’t it? Mwha­haha. Seri­ously though, if I could get YOU my dear read­ers and fans and looky-loos to “like” the film, I’ll give you some­thing in return.

A signed copy of The Ben­son — IN PAPERBACK. 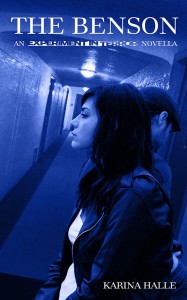 Do you know who has copies of The Ben­son in paper­back? NO ONE. Not even ME! For realz. I only made this as an E-version, so I’m going to print just one of them. It’s going to be cus­tomized. It’s going to have the first two pages of On Demon Wings at the back of it. That’s right…I’m includ­ing an excerpt from Book #5…something that won’t see the pub­lic eye until at least May.

I will ship this puppy any­where in the world. And I will throw in a signed Dark­house book­mark as well!

And then when you receive the book, take a pic­ture of you with it and I’ll post it here and on the EIT Face­book page

So how do you enter to win this? SO SIMPLE.

Click on the link to the con­test page and our Casablanca film: http://vancouver.virginradio.ca/FFF2012/View.aspx?PostID=45564

Then come back and tell me you entered. Either email me (see con­tact page) or leave a com­ment here or leave one on the EIT FB fan page. But you MUST tell me you liked it, oth­er­wise there is no way I will know. I’ll be watch­ing the num­bers too, so I’ll know if you’ve actu­ally voted (not that I’m not trust­ing y’all

You can gain an extra entry too by “lik­ing” our Face­book Fan Page for Casablanca too or fol­low­ing @strutyourfunny on Twitter.

Did you already “like” the Casablanca video before I announced this? Just help me out with a per­sua­sive RT on Twit­ter and you’re entered too! (again, lemme know about it).

All right. That’s the con­test. It’s a con­test within a con­test. INCEPTION CONTEST. And some lucky EIT reader is going to be very, very happy. I’ll be doing the draw on Feb 5th and will announce it HERE and on the EIT FB page!

Good luck and thank you!

If you’ve placed a win­ning bid or clicked the Buy It Now but­ton in a list­ing, you’ve com­mit­ted to pur­chas­ing that item. If you don’t pay for it, even if you’ve changed your mind, you vio­late the unpaid item pol­icy. Here are some examples:
Tweet