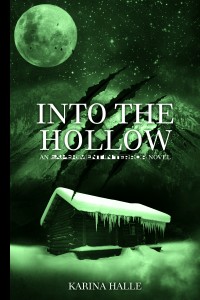 You know what’s awe­some about read­ing? The whole word of mouth thing. I’ve per­son­ally watched on GoodReads how one per­son is read­ing a book, leaves a review (doesn’t even have to be an awe­some review) and sec­onds later another friend is snap­ping up the book and read­ing it her­self. It’s an amaz­ing process and I owe a lot of Exper­i­ment in Terror’s suc­cess to the fact that many lovely read­ers have tried to get their friends to read it…and in some cases…succeeded!

To say thanks for that, I’ve opened up a buddy con­test where you and your EIT-loving friends could win an Into the Hol­low ARC.

Now obvi­ously it’s a lit­tle hard to reg­u­late a con­test like this because any­one could say “yeah my friends Boo Boo and Mary-Sue have read the book because of me”, so the clos­est thing I could come up with is using GoodReads.

To enter the refer­ral con­test, which is run­ning until Octo­ber 1st, all you have to do is leave a com­ment below on the blog A) link­ing to your GoodReads pro­file and B) link­ing to your friend’s GoodReads pro­file (how­ever many friends you have got­ten hooked). NOTE: if your pro­file or your friend’s pro­file is pri­vate, you will have to add me as a friend. You can delete me later. I just need to be able to see that the friends have indeed read the book (they didn’t have to like it) or are cur­rently read­ing the book (and that’s ANY of the EIT books AND/OR The Devil’s Metal when it comes out).

This con­test is open inter­na­tion­ally and there will be one win­ner and their friends announced on Octo­ber 1st. Obvi­ously there is more than one way to win because if there is a group of you and you’ve got­ten each other hooked, you can be entered as a friend…for exam­ple: Perry reads Dark­house rec­om­mends it to Ada who reads Dark­house and then they both rec­om­mend it to their friend Pippa who reads it. Perry could enter the con­test link­ing to both Ada and Pippa, who both read the book per her sug­ges­tion. But Ada could ALSO enter the con­test, say­ing she got Pippa to read it. So Ada gets two chances to win..see what I mean? So, the­o­ret­i­cally, there could be a lot of win­ners here! And isn’t it fun to win stuff for your friends??

Any­way, that is the refer­ral con­test on GoodReads! Do you have an account? Have you got­ten at least one other friend on Goodreads to read EIT and/or The Devil’s Metal? Then you can enter and you both have  the chance to win a copy. Easy as pie (and you know how Dex feels about pie).

That plus an Advanced Reader’s Copy of Into the Hol­low BEFORE pub­li­ca­tion date…pretty cool, right?

Speak­ing of The Devil’s Metal…that segue doesn’t work, but ANYWAY we have our early reviews AND a pub­li­ca­tion date: Sep­tem­ber 21st. I’ll be back to remind you, but I thought I’d give you a heads up…THIS FRIDAY, SEPTEMBER 21st, THE DEVIL’S METAL WILL BE AVAILABLE ON KINDLE AND SMASHWORDS. Nook, Kobo, etc to fol­low. AND YES paper­backs are com­ing too.

Oh, and about those reviews.…here they are!

I was for­tune enough to be a Beta reader for this book. And I am so glad I got to read it first because I can tell you all how amaz­ing it is! If you are a fan of EIT you will love The Devil’s Metal. I won’t give away too many details because I don’t want to spoil the awe­some­ness that is this story, but I will share some highlights.

First of all, holy fuck Karina Halle is bril­liant. Not only are the char­ac­ters so real and lik­able, espe­cially Dawn, but the plot moves so well I for­got I was read­ing. It felt like a movie being played out in my mind. Vivid and detailed and totally intriguing.

Dawn is such a great char­ac­ter. Strong and deter­mined but also a lit­tle young and impres­sion­able. I like her dynamic with Sage and how their rela­tion­ship grows and changes through­out the book. And the sex? Hoo boy! HOT! Dawn has her typ­i­cal “rock band” expe­ri­ences but still man­ages to keep her head and do her job amognst the young and sexy rock stars. A true feat in my opinion.

The 70’s vibe came through loud and clear and there were great snip­pets of life back then, very authen­tic. The author def­i­nitely did her reasearch. And the rock side of the story was fun! 70’s rock is not really my favorite genre but the depth of knowl­edge about the music, the bands, the feel­ings of that time in his­tory were so real I felt like I was expe­ri­enc­ing the con­certs and back­stage antics for myself.

The hor­ror aspect was really good and mixed in well with the story. There were parts when I was glad all the lights were on and I was safely inside my house. This book will most likely scare your socks off.

Over­all, if you are a fan of EIT you will love this book. It has incred­i­ble depth and the char­ac­ters come to life in such a way you have deep feel­ings for all of them, whether bad or good. The hor­ror quo­tient is high and the plot has enough twists to keep you won­der­ing what will hap­pen next. I highly rec­om­mend it!

So I was one of the edi­tors assigned to this book. As much as I want to rate it, it would be inap­pro­pri­ate and a con­flict of inter­est for me to do so. But those that know me and trust me know that I wouldn’t scam them, so I decided to write a lit­tle review with­out a rat­ing. That way I can still share my thoughts because I really want to.

First thing you should know, if I could rate this book, it would have EASILY got­ten 4 stars, but there’s a good chance I would have given it 5. I adored this book. The char­ac­ters are ridicu­lously well-developed and there are a good num­ber of char­ac­ters here. Some I hated, some I loved, but most of all, they make you feel.

The plot is scary, roman­tic, and mes­mer­iz­ing. I know this term is overused, but this book is utterly unput­down­able. I’m a huge fan of Karina’s writ­ing style. She has a way of get­ting her point across in a beau­ti­ful but easy to under­stand way. The way she writes scenes from scary to sexy will leave you want­ing more.

This book is set in the 70s. And I really think she cap­tured the atmos­phere and the essence of the decade won­der­fully. The boys in the band are swoon­wor­thy, the groupies are ridicu­lous, the sex is hot, the fash­ions are out­ra­geous, and there are men­tions of great music and leg­endary artists. Oh, and drugs. You will truly feel like you are there on tour with the band.

But most of all, you will feel unset­tled and creeped out. After all, at its core this is a hor­ror novel. And a really fun ride at that.

I’m extremely relieved at these early reviews, even if they are of the 1st draft. There were times when I was plow­ing through this book (I think I wrote it in three weeks, but don’t quote me on that!) that I was like “how is this ever going to be any good?” and full of the usual self-doubt. I was wor­ried it sounded too much like another book and when I was done wor­ry­ing about that, I was wor­ried it would never get fin­ished and when I was done wor­ry­ing about that, I was wor­ried it would suck balls. And not good balls, BAD balls. BUT…so far, people’s reac­tions have sur­prised me. These two ladies up there aren’t the only beta read­ers, just the only ones who have left a review (so far), so I’m con­fi­dent now that if you like to be scared (and per­son­ally I don’t think it’s scarier than any EIT book, so wimps rest assured) and you like sexy times and ten­sion and exotic, 6’4″ tat­tooed rock stars and rock n’ roll and the 70’s and some­thing really dif­fer­ent, you’ll like The Devil’s Metal. You may even love it. I know I do