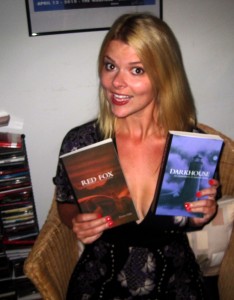 Said the pres­i­dent of a pub­lish­ing house to a young, self-published author. AKA Me. And who doesn’t like to hear that?

But…let’s back up. So, today I had a meet­ing with the pres­i­dent of a pub­lish­ing house. How? Let’s just say when your future in-laws and your par­ents belong to a golf club, lots of con­nec­tions can be made that way. And pub­lish­ers like to golf.

Set­ting the scene: A gor­geous evening in British Colum­bia. Bright blue sky, blind­ing sun, ocean breeze, excel­lent wine…mosquitoes. The pub­lisher asks me what my books are about, how they have been sell­ing, the whole deal. Then she asks, “What are your long-term goals? Do you have any aspi­ra­tion to be pub­lished by a pub­lish­ing house?”

And that was the truth. Our con­ver­sa­tion con­tin­ued and I did state that had I just one book to sell, then yes. Of course. And if a pub­lisher was like, “here’s a lot of money” I’d be like, yeah…But I have a series and I think I’m doing quite well on my own. I explained my mar­ket­ing strate­gies, where they were being sold, how many I’ve sold, my plans for the series in the future, the fan base, etc.

And to my sur­prise… she said I was doing the right thing. In her words, I was doing every­thing right. I am doing every­thing that a pub­lish­ing house would be doing, reach­ing the same peo­ple in the same ways. The only dif­fer­ence is that yes, it would be eas­ier for a writer to not worry about pub­lish­ing (just worry about writ­ing) and I would have clout. You know, the whole “I’m ACTUALLY pub­lished” clout that comes with the territory.

But then the pub­lisher cor­rected me and says, you know what.. you HAVE clout. And you are pub­lished. So it’s self-published, so what? It’s out there. Your books look fine, it’s POD, you’re not los­ing any money on them. Your work obvi­ously speaks for itself. You’re mak­ing money that you don’t have to split with an agent and a pub­lisher. You’re reach­ing fans. I mean, it’s a slow going busi­ness that relies heav­ily on word of mouth and you’re get­ting there. Being pub­lished wouldn’t nec­es­sar­ily get you there any faster.

Besides, the moment you are pub­lished you pass up your con­trol. You give up your rights to your book, the rights to your series…your char­ac­ters (and this is com­ing from the publisher’s mouth). And I’m 3.5 books in…I can’t do that. I wouldn’t. And that’s why — at least with the Exper­i­ment in Ter­ror Series — I really don’t need nor want a pub­lisher. I’m not say­ing this to be stub­born or any­thing, it’s just the truth. If you had asked me that ques­tion six months ago and I would have said the oppo­site. But now, now that I’m liv­ing this career choice each day, I know what the deal is…being pub­lished WOULD BE EASIER (and awe­some, of course!) but I’d be giv­ing up a lot in exchange.

So that really was the extent of the meet­ing. Lit­tle ol’ me explain­ing all of my strate­gies and the pub­lisher telling me I don’t need a pub­lisher. I just need to be myself and keep going. The suc­cess will come, I’m a con­fi­dent woman (her words) who knows an awful lot about what she’s doing (still her words) and that all I need to have is patience. And a bit of luck.

That said, she did take copies of my book that she’s send­ing to her lit­er­ary agent friend in New York. Cuz…well, you never know