WOO HOO! I am pleased, so fuck­ing pleased, to announce that The Devil’s Metal has been com­pleted (1st draft any­way). It was a fun, hell­ish ride and I’m grate­ful to my friends, fans and beta-readers for encour­ag­ing me to keep going with it. I feel like I’ve been on a hot, smelly tour bus with a bunch of fucked up rock stars for two weeks. yeesh. LET ME OFF!

Now that it’s all done, I can safely say that I don’t think the book can be com­pared to anything…except Almost Famous. And In the Mouth of Mad­ness. And Jennifer’s Body. And The Devil’s Advo­cate. And Final Des­ti­na­tion. And so on. OK, well you’ll have to see for yourselves.

Here’s Teaser #4 — as my beta reader Emmy pointed out, EIT “the­o­rists” might be intrigued (do note, as usual, this is unedited).

Even­tu­ally Jacob noticed some­thing was going on. Or he’d always noticed and had waited for the right time to bring it up. With nor­mal Jacob fla­vor, it hap­pened to be a few min­utes before the show.

“Tell me what’s on your mind, Rusty,” he said dryly as we stood at the side of the stage. He was run­ning a nail file under­neath his nails and flick­ing out the dirt.

“I got a call from Barry today.”

“He said he’d been receiv­ing some let­ters about me.”

“If I didn’t know bet­ter I’d say that Terri or one of the other Get The Fuck Outs is behind it. It kind of gels with what you said back…well what­ever city that was in. That it was groupie high school.”

His golden eyes remained on his nails. “Oh yes, ain’t that the truth, love.”

“So, that’s going on. I’m mildly freaked out.” I crossed my arms feel­ing a chill.

“I can see that. I don’t blame you. Do you think these girls are…dangerous?” he said the last word like it was laden in silk.

I gave him a weird look. “You tell me! I’ve just learned who they are. You’ve dealt with them longer.”

He exhaled sharply through his nose and finally looked me in the eye. His red hair flamed under the stage lights, giv­ing him a hell­ish aura. “Every­one has the chance to become dan­ger­ous. If the right weather pat­terns are cre­ated, if the right feel­ings are invoked…feelings of injus­tice. Jeal­ousy. Feel­ings of being owed some­thing they believe they have a right to have. To…collect. We all have it in us to become a dan­ger, either to oth­ers or to our­selves. It’s a mat­ter if the right clouds are brew­ing. Cer­tain clouds will cre­ate a storm.”

“And?” I egged him on impa­tiently. “What clouds are brew­ing? Are these groupies dan­ger­ous or not? Do I need to start sleep­ing with a switch­blade under­neath my pillow?”

A slow smile spread across his rough lips. Then he shrugged and turned his atten­tion back to clean­ing his nails. “Couldn’t hurt, could it?”

Giv­ing a way a pair of Hybrid undies (Medium) and an e-format ARC of The Devil’s Metal! To enter, leave a thought­ful com­ment (just one) on the FB post. I’ll do a draw in a week for one lucky win­ner. Open worldwide. 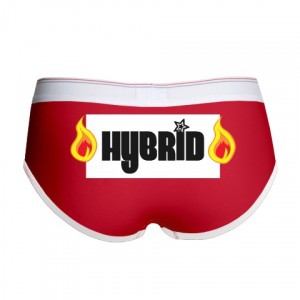