Exper­i­ment in Ter­ror. Have you seen the 60’s film with the won­der­ful Glenn Ford? Have you heard Henry Mancini’s snazzy sound­track which was later cov­ered by one of my favorite bands of all time, Fantomas?

Well, at least here you get a snip­pet of it. This is the cred­its of the film with Fan­tomas play­ing the track on top. Fan­tomas is made up of a bunch of my most favorite people…Mike Pat­ton, Dave Lom­bardo, Buzz Osborne and Trevor Dunn. Each of those musi­cians are geniuses in their own right. And Dave, who has read Dark­house and Red Fox by the way (he says it was fucked up — I’ll take that as a com­pli­ment from Mr. Slayer), thought it was pretty cool that the series was named after a Fan­tomas song…that cov­ered a Blake Edwards song. Lol. 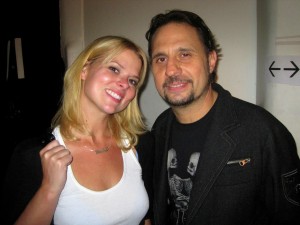 I do have a habit of nam­ing books after songs. I named Red Fox after a Tom­a­hawk song (about skin­walk­ers), and that in itself is funny because when I gave Dave the book he imme­di­ately started singing Tom­a­hawk. Exactly what I was going for.

Later on too, I ended up inter­view­ing John Stanier, who drums for Tom­a­hawk (and the fero­cious Bat­tles, and ex-Helmet) who also thought it was pretty cool that I named a book after one of his songs. 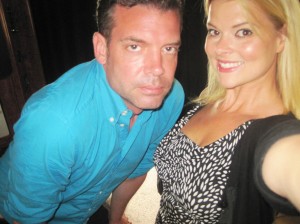 Any­way, music is pretty impor­tant to me obvi­ously (I’m a jour­nal­ist and fan girl all rolled into one)…and it’s some­thing that will be dis­cussed more in an upcom­ing interview/post with blog­ger Emmy Reads. Oh and The Devil’s Metal. That books is like…totally up my alley. And yours too, I hope.

Oh yes, the cover for The Dex-Files! VOILA!! 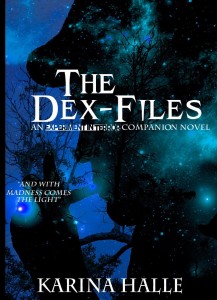 You can also add the book (com­ing out August 13th) to your Good Reads TBR pile HERE.

I was six years old when I got my first taste of hell.

I woke up to a hor­ri­ble howl­ing noise, like a dog caught in the throes of deep emo­tional pain, agony that went beyond the phys­i­cal. It was chill­ing. Ter­ri­fy­ing. Like, make your balls shrivel up into pricks of ice sort of ter­ror. It quickly plucked away what­ever igno­rance my sleep had thrust on me and slapped me in my young face. This wasn’t a dream. This was as real as all hell. There was a mon­ster in my house, the kind that preyed on lit­tle boys, but it wasn’t under my bed or in my closet. It was next door. Or, as it seemed to be, the floor below, scratch­ing and howl­ing its way from the kitchen.

It was my mother. And from the sounds of glass break­ing and fur­ni­ture scuf­fling, my dad had found her. The howl­ing inter­mixed with his boom­ing voice, his threats, his pathetic cries that betrayed the col­lected man he was always try­ing to be. It sounded ugly. It always sounded ugly but tonight I was espe­cially scared. When a vicious cry was fol­lowed by the sound of some­one being shoved into a wall, I’m not ashamed to say I promptly wet myself. Piss­ing your pants seemed the only thing to do when the mon­ster was loose and I made a silent, naïve prayer to the man upstairs, pray­ing that it was my mother who was thrown against the wall. I’m cal­lous, maybe. I’ve been called worse. But if it were my father, and he was out cold, she’d come look­ing for me next.

I thought about pulling the cov­ers over my head and hid­ing from it all like a cow­ard, but that never worked. I would pre­tend all I could that my blan­ket was my invis­i­ble cloak and it would shel­ter me from every­thing bad in the world but I learned at a very young age that there was no such thing as shel­ter. Maybe I would have been safer if I didn’t care. Maybe indif­fer­ence could have been my pro­tec­tor. But I still loved — and feared — my par­ents. That love is what scared me. It gave them the upper hand. They sure as fuck didn’t love me.

I heard a shuf­fling from out­side my door, slow and light. It was only Michael, though it rat­tled my wee body to think things were bad enough that he got out of bed. Michael was just three years older but he might have well been another decade. He was the golden boy, the child of light. I was the runt, the child of dark. I feared. Michael didn’t.

I quickly jumped out of bed and scur­ried across to the door, pur­posely miss­ing the part of the floor that I knew squeaked. I turned the knob silently and saw Michael’s shadow just down the hall, head­ing toward the stairs. Half of him was lit up by a dying night light.

He stopped as soon as he heard me and though I could barely see it, I could feel the look. It said go back to bed, you’ll get us in trou­ble. Only I could get us in trou­ble just by being awake. I still don’t know why my mother had it in for me. Some­times I think she saw a lot of her­self in me, even at such an age. That’s a fuck­ing ter­ri­fy­ing thought. I’d be lying if that, and other things, didn’t keep me up at night.

That look though from Michael, that was the most I’d ever seen him scared. It felt good, self­ishly good, to know he wasn’t inhu­man, that he feared things too. Maybe not the way I did, but hell if I hadn’t been won­der­ing if my brother was born with­out a soul. Now I knew he was just older and bet­ter at hid­ing it than me.

I opened my mouth to say some­thing but he placed his fin­ger to his lips. We lis­tened. The wail­ing had stopped. There was no more noise.

The fresh piss felt cold against my legs and I was sud­denly, acutely embar­rassed of what I had done. It’s damn funny how Michael had that effect on me.

Even fun­nier was how I remem­ber reach­ing out for his hand, look­ing for some sort of pathetic com­fort in my blood rel­a­tive, my Mikey. He jumped as if my very touch star­tled him or scathed his skin. Yet he let me hold his hand, even though it was tiny and clammy and I grasped him hard, until bone rubbed against bone. I never felt as grate­ful to my brother as I did at that moment, for not let­ting go. Yeah the ass­wipe would let go later. Fuck, he’d order up my own exe­cu­tion if he could (don’t think he wouldn’t try). But at that moment, I wasn’t alone.

We made our way down the stairs, hold­ing hands. You’d think it would be less scary with­out the yelling and the damn woman howls, but the silence was hazed with sus­pense and unheard threats, and for­get the smell of urine ema­nat­ing from me, I was this close to shit­ting myself.

When we reached the floor we heard a very slight tin­kling of glass. We both froze and Michael’s grip on mine inten­si­fied. Just for a sec­ond. But it was enough.

The sound was fol­lowed by a groan. Then a flop­ping sound of body and skin against shiny tiled floors. This wasn’t good. This was very, very bad.

I wanted to turn and run. I think I may have tried. But Michael held me there and we both watched as a dark fig­ure came crawl­ing out of the door to the kitchen. She moved on the floor like a drunk snake. That’s what she was, after all. A fuck­ing drunk snake out to eat us alive.

She didn’t get far. Her arms were out­stretched and reach­ing for us but she got two feet before she gave up and passed out. She smelt like wine and evil. Like sweat and sad­ness. Of all the feel­ings that hit me at that moment, I felt…bad. Look­ing back, I pitied her.

Michael and I stood there, star­ing dumbly at our uncon­scious mother. Michael’s eyes were hard in the dark­ness, tiny pin­pricks in the black. I won­der, did he feel hate toward her? Did he still love her? Did he feel loved? Or was he con­fused as I was, for­ever mix­ing up love and hate and fear and females. I’ll never know. I don’t think I even care.

The spell of shock wore off when we heard another sound from the kitchen. My father was stir­ring. My first instinct was to run and hide. I feared him in a dif­fer­ent way. That I’d get a spank­ing for wet­ting my pjs. That I’d be told I was noth­ing but a fuck up (not so much in those words, I was six after all, but I got the gist. I’m no dummy). But he didn’t notice in the dark­ness. He appeared in the door­way, stand­ing over my mother, with an expres­sion of hope­less­ness and utter dis­dain on his face. This is what I get, it said.

Instead he said, “You boys are get­ting a nanny. We can’t live like this.”

My name is Dex Foray and I’m a hyp­ocrite. Proud of it, too. I call my mother a mon­ster but I’m the one who took her last name. Maybe because unlike my dad, she never left me. There’s some­thing to be said for stick­ing around…even if it kills you.

I’m a hyp­ocrite because I can’t stand weak­ness in oth­ers, even though I’m born of weak­ness myself. I dish it out and then laugh when they try and dish it back. Like I’m above it. And some­times I think I am.

I’m a hyp­ocrite because I hunt ghosts and I’ve pre­tended all this time that the ghosts haven’t been hunt­ing me.

And I’m a hyp­ocrite because I judge peo­ple. I judge the fuck out of every­one I meet, from their music tastes, to their jobs to their lifestyle choices. I judge them but fuck them if they dare judge me. They think they under­stand this mon­ster in me, the mon­ster in all of us. But they don’t.

They don’t know where I’ve come from.

They don’t know my side of the story.

But now you do.

And now I’ll leave you with some Dave Lombardo…Enjoy!