Get­ting into the Hal­loween spirit, I was try­ing to think of movie I could watch that would scare the shit out of me. 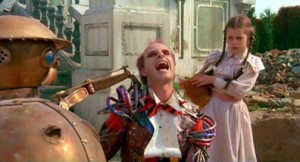 There were some usual sus­pects like The Shin­ing and The Exor­cist. But most of the titles that flashed through my mind were kid’s movies. Either movies I found scary as a child, or movies that weren’t meant to scare chil­dren. In my clouded mem­ory, it’s hard to tell the dif­fer­ence. Was I really sup­posed to be scared of the lit­tle midget peo­ple in Wil­low? So I decided to com­pile a list of movies that freaked me out as a child, unin­ten­tion­ally or not. Some of these films I would like to watch, just to see if the scare tac­tics still work…I did that with Pol­ter­geist last year and found while the guy rip­ping apart his face in the bath­room was scary, the tree reach­ing into the win­dow and grab­bing the boy was not.

The Never End­ing Story — That dog was freaky! I know, I know he’s cute…but still. And then the horse, in the swamp and, and…

Return to Oz — And this is sup­posed to be a children’s film? It’s NOT. PS don’t watch it on mushrooms.

Care­Bears the Movie and the Sequel — Shut up. It had scary bits.

Jacobs Lad­der — Don’t think that was a kid’s film.

The Witches — Anjel­ica Hous­ton at her scariest.

The Secret of Nimh — There is some­thing mildly dis­turb­ing about that film. Just so.…uneasy.

Lost High­way — Again, not a child’s film. But Robert Blake with no eye­brows is scary as hell.

Ghost­busters — There was some­thing in her fridge…

Dumbo — Shut up. Don’t tell me you weren’t scared by the psy­chotic Pink Ele­phants on Parade.

The Birds — His eyes were pecked out!

Flight of the Nav­i­ga­tor — The 1st half of the movie was creeeeepy. Then Sarah Jes­sica Parker showed up.

The Last Uni­corn — Weird, trippy stuff. Leaves a bad taste in your mouth.

All right. That’s my some­what lame list (yes, I am a dork). Feel free to share me yours by reach­ing out to me on Twit­ter (@metalblonde)