It’s the strange time of the year for me where I don’t know what to do with myself. On August 17th, at 2AM, I fin­ished writ­ing Book #4, LYING SEASON. I was a bit of a wreck about it. This book really had me con­nect­ing to the char­ac­ters, way more than nor­mal. Like a crazy amount. And I was feel­ing every thing they were. It’s been a topsy-turvy emo­tional roller­coaster for me…and of course for Perry and Dex.

It’s the longest book by far, and is fully-loaded with extra top­pings. Lots of answers, lots more ques­tions. The char­ac­ter growth took me by sur­prise and most of the book wrote itself, which was a won­der­ful ride for me as an author. It’s by far my favorite book and the one I am most proud of (not that I’m not proud of all of them). But it’s really spe­cial to me.  And the ending…well, let’s just say a very strong part of me is beg­ging me to con­tinue right onto Book Five. 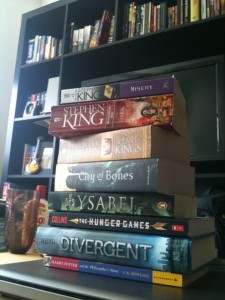 I do feel I deserve a bit of a break…some days on Lying Sea­son I was pulling 12 hours (note to self: writ­ing for 12 hours straight will SERIOUSLY MESS YOU UP). And I have a whole stack of books to read, that I want to read:

–I just fin­ished City of Bones. I liked it a lot more than I thought I would.

–Fin­ish the last half of the last Dark Tower Book (reluc­tant to, since I’ll miss Roland and his ka-tet when it’s over)

Then its Clash of Kings, Diver­gent, Across the Uni­verse, Star­crossed, Ysabel, Horns, The Iron King, Harry Pot­ter #1 and Hunger Games…though who knows what order I’m doing this in!

Any­way, so that’s all the read­ing I have to do (well, WANT to do). But some­thing tells me the pull to start on Book #5 might be too great. Who knows.

The afore­men­tioned Lying Sea­son will be released on Novem­ber 13th, 2011 (one month after Dead Sky Morn­ing is released).